~ BURMA IN CRISIS— Burma needs help NOW: “Sources said 200,000 people were already dead or dying… But the figure could rise to HALF A MILLION through disease and hunger.” SATELLITE IMAGES of devastation in Burma. Here’s a link via which to give in Canada … (jaycurrie, instapundit) 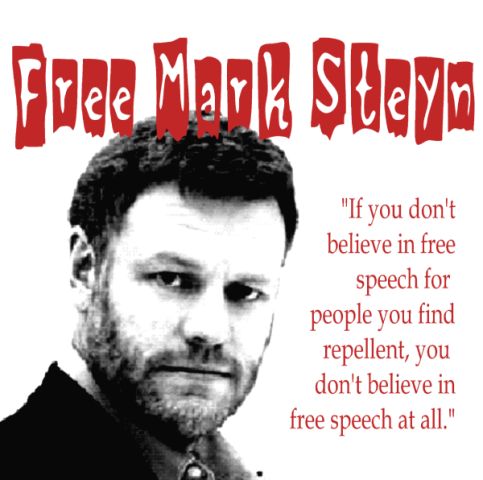 ~ A DEBATE— Torontoist vs. Torontoist in… Steyn, Maclean’s, and the OHRC …. (torontoist.com)

~ MARK STEYN on the Michael Coren Show and other Canadian programs this week …. (fivefeetoffury)

~ PAGE UPDATE with Part 4 of the recent TVO …. (steynian)

~ BREAKING: Ezra Levant to Debate Ian (Everything with the CHRC is) Fine of the CHRC?? …. (blazingcatfur.blog)

~ MACLEAN’S— “when hate goes around, it comes around. Thirteen years ago” …. (MaD)

BRAINCHILD OF MUSLIM SCHOLARS‘. Where to begin? Minus a brief hiccup in the 11th and 12th century, there’s no evidence for this claim– aside from which, the Aristotelian model was thought by Muslim religious authorities to directly undercut the authority of the Koran and Muhammed. In any case, even granting that Averroes was amazing, how does Dr. Elmasry explain the anti-intellectualism of modern Islam (the 12th century is 800 years ago), and virtually no world-renowned departments of Aristotelian or secular philosophy to be found at universities in officially Muslim countries? Indeed, “It speaks volumes that a millennium later, such intellectual curiosity about the “Other” and his ways is hard to find in the Muslim Middle East— whose inhabitants, the United Nations reports, have translated fewer books over the last 1,000 years than Spain translates in one year.” [ “The figures for translated books are also discouraging. The Arab world translates about 330 books annually, one fifth of the number that Greece translates. The cumulative total of translated books since the Caliph Maa’moun’s time (the ninth century) is about 100,000, almost the average that Spain translates in one year (Galal, S., 1999).” – Arab Human Development Report 2002, p. 78.. direct link] …. (canadianislamiccongress.com)

~ HUMAN RIGHTS PROGRESS: “A Malaysian Islamic court allowed a Muslim convert Thursday to return to her original faith of Buddhism, setting a precedent that could ease religious minorities’ worries about their legal rights” …. (instapundit)

~ ISRAEL @ 60: To Stay Independent and Free, Understand and Fight The Jihad …. (andrewbostom.org)

~ THE PEACE-LOVING former Jordanian “minister of religious endowment” Sheik Ali Al-Faqir appearing on Al Aqsa TV May 2, 2008, with an Islamic supremacist rant about taking over the world …. (lgf)

~ JUST SO SICKENING: “Rotberg is a Canadian author who has faced the manufactured wrath of Islamists after they made up allegations against him” …. (blazingcatfur.blog)

~ FUN IN PAKISTAN: Religion of Peace Burns Down Another Girl’s School …. (Wz)

~ EVERY MUSLIM SHOULD should be a terrorist. Pakistani Mufti: Every Muslim Must be Ready for Martyrdom to Protect Prophet Mohammed …. (dustmybroom, Wz)

~ CHILL-PILL: WaPo Cancels Article for Being ‘Too Critical’ of Islam …. (weaselzippers.net)