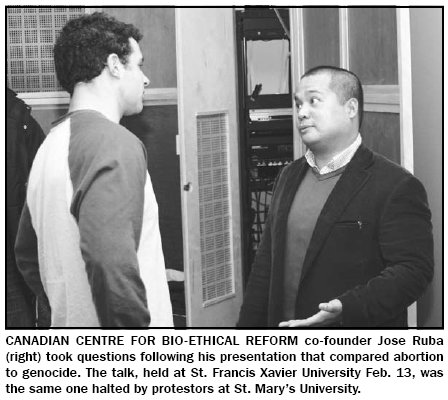 A fair comparison can be made between abortion and the Holocaust, Canadian Centre for Bio-Ethical Reform co-founder Jose “Jojo” Ruba said Feb. 13 during his presentation, “Echoes of
the Holocaust.” “Abortion is 100 percent evil,” he said when questioned on whether a woman facing the decision to abort a fetus can be likened to a World War II Nazi.

A group of about 20 protestors left the presentation in silence when Ruba asserted abortion was wrong.

During the post-presentation question and answer session, a letter from the protestors was read to the audience. “We feel that by drawing the comparison between abortion and the Holocaust, your organization is not only using an important and tragic part of Jewish history for its own agenda, but is targeting, belittling and shaming women,” it read.

During his presentation, Ruba said abortion could be compared to genocides such as the Holocaust because of four basic similarities: people were killed based on their abilities or appearances;
dehumanizing rhetoric was used; there is a systemic nature to the killing; and there is a massive loss of life.

Ruba argued life begins at conception, and a fetus should not be discriminated against because of its size, level of development, environment or dependence, an argument first raised in the 1990
Stephen D. Schwarz book A Moral Question of Abortion, often referenced in pro-life literature.

Ruba debunked a pro-choice argument that compares a fetus to a parasite by saying it mimics the rhetoric Hitler used to dehumanize the Jews.

After the presentation, he explained the difference between a fetus and a parasite. “The natural home for the unborn is in their mother’s womb. The woman’s body is designed to house their offspring.”

That doesn’t give women domain over what happens inside the womb, he added.

President of the St. F.X. Students for Life society Lara Lavelle, who helped organize Ruba’s presentation, said she thought the debate was well received. “I was happy with the response of the talk. It was from both sides.”

St. F.X. reacted quickly in ensuring the presentation wouldn’t be interrupted, she added.

“As soon as the SMU debacle went down, St. F.X. communications got in touch with us.” Campus police attended the presentation to keep an eye on things, she added.