(in order of receipt)

Up to the walls of Ottawa
He marched with spear in hand;
“Go blow them ram horns,” Ezra cried,

“for the battle is in my hand.”

How bout this for a T-Shirt: Mark Steyn – the poor man’s Blazingcatfur;)

– Blazing Fur of the Cat

there was a young tiger named Steyn
the HRc tried to keep in line
when they said, do not talk, he replied, take a walk
that courageous young man named Steyn

First, I’ll admit that the following takes some liberties with both the arguments at stake and the things that have actually been said, not to mention the HRC’s response to the whole deal, which is too stupid to be poetic anyway (thus the highly fanciful envoi at the poem’s end). Because we live in the country in which we do, what’s more, I should say at once that the words here “attributed” to Messrs. Levant and Steyn are in no way actually and literally being attributed to them, but are rather versified paraphrases of things they have or might have said.Also, I know that the last word of the seventh line of the first stanza doesn’t really rhyme with the rest of it properly; you’re welcome to try to write some manly and coherent alternative that ends with “pearled,” “curled,” “twirled” or “swirled,” then, and get back to me.

Ballade on the Imprudent Utterances of Two Gentlemen

Said Ezra: “Well, it’s newsworthy, for one;
People are dying all around the world.
To what was meant for freedom, and for fun,
These killers flock as to a flag unfurled.
But more than this, such grim invective hurled
By foaming imams at unfettered speech
Confirms what I have long and always held:
That thoughts and words should lie beyond their reach.”

Said Mark: “Of all the subjects of the age,
The long, slow western suicide is one
That should, with Islam’s worldwide rise, engage
The minds of all who toil beneath the sun.
When imams say their battle’s just begun,
When pundits milquetoast tolerance beseech,
It’s vital, then, when all is said and done,
That thoughts and words should lie beyond their reach.”

But no: “That’s only your opinion, sirs;
We live in a plural society,
Where those whose ideas differ much from yours
Can drag you here, before this HRC,
And, laying out their grievances for free,
Suborn you to their feelings, each by each.
And all this done, how then, sirs, could it be
That thoughts and words could lie beyond our reach?”

Dear sirs, you have but thirty days to close
Your mouths, or failing that, perchance, to reach
Some amicable settlement with those
Who’d have your thoughts and words within their reach.

Yeah, a t-shirt that says DON’T ASK ME ABOUT RICHARD WARMAN would be pretty funny!Or if you like Fawlty Towers: DON’T MENTION THE WARMAN – Kathy Shaidle

A t-shirt that says “I’m With Illiberal”, arrow pointing (of course) to the left. Pdf picture.

How about a new header for the blog?

Someone I know is making me a T-shirt with…“I support the Canadian Human Rights Act Subsection 13(1) because……Your freedom of speech ends where my feelings begin”…written on it. Although, for the sake of full disclosure, I have to admit something similar to the latter part of the phrase appeared in a Spacemoose comic years ago.

Here I sit, broken-hearted
Graffiti-less, the cad’s departed
Yesterday I took a chance
Saw a swastika and pissed my pants

After seeing David K. Macdonald’s limerick for Steyn, I would like to make the following entry for Levant.You can change the word CRANK if you want (e.g. to MAN). The Merriam-Webster Online Dictionary defines CRANK as “an annoyingly eccentric person” or “one who is overly enthusiastic about a particular subject or activity” or “a bad-tempered person.” I think the word fits well with this rant that was heard by over one million Canadians:

A crank by the name of Levant
Tried publishing as he was wont;
Compelled by a thug,
He made his own plug–
A man H.R.C.’s cannot daunt.

My last line is clumsy. I would change it now as in the following:

A crank by the name of Levant
Tried publishing as he was wont;
Compelled by a thug,
He made his own plug,
Exposing the h.r.c.’s haunt.

A crank by the name of Levant
Tried publishing as he was wont;
Compelled by a thug,
He made his own plug
And you-tubed the h.r.c.’s haunt.

Just sit right back and you’ll hear a tale,
A tale of Maclean’s and Steyn,
And how they got in trouble when
They wouldn’t toe the line.

The skipper was a lobby group,
Elmasry’s CIC.
Four sock puppets blew smoke
While skip’ ran to the HRC.
(That leaky HRC.)

The mag, they said, had done ’em wrong,
Had made them barking mad
By claiming that some “radicals”
Were “hot for the jihad.

”The words (though true)
Abridged their “rights,”
Could stir up fear and hate.
A “pre-crime” that the commissars
Must now adjudicate

So tune in as the Thought Police
Pursue their fav’rite sport—
Compelling folks to toe the line
There in kangaroo court.

With apologies to G&S:

I am the very model of a human right commissioner.
I listen to and weigh in on the claim of each petitioner.
My Weltanshauung’s Left and I want everyone to think like me.
And when they don’t I must say that it is the biggest mystery.

I’m very well acquainted, too, with elements heretical
I understand what activates and keeps them so kinetical.
About “hate speech” I’m well apprised and verging on the Stalinist.
And my deliberations are a fact that they cannot resist.

And what you see before you is the ultimate and end result.
In short, like a contemporary Spanish inquisitioner.
I am the very model of a human rights commissionerI know our mythic history from way back in the 70s.I ask the trenchant questions and subject folks to the third degree.
I sat there, stunned, as Ezra’s eloquence hit like a tsunami
And told him he’s entitled to opinions–yes, most “certainly”.

I want you all to think nice thought and always act with politesse
‘Cause if you don’t you must agree we’ll be stuck with an awful mess.In short, consider me society’s “niceness” conditioner
And heed the very model of a human rights commissioner.

Oh, silly me! I’d even heard Mr. Mercer’s rant, but I forgot the correct pronunciation of LEVANT, which I have always pronounced wrongly. (It’s a word as well as a name, but not one I use often.) For a limerick that rhymes correctly, here is John Begley’s comment at 8:56 a.m. under Ezra Levant’s March 24 “Moncton, Saudi Arabia” post (www.ezralevant.com).a calgary jew named Levant
was dismissive of islamic cant
soharwardy’s omissions
and human rights commisions
became butts of felicitous rantsJon 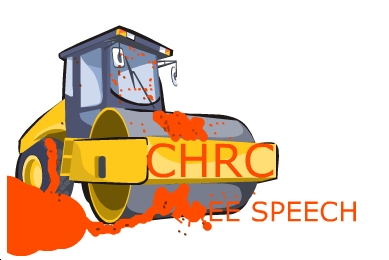 Section 13
Only in Canada
Roll down pants; assume position 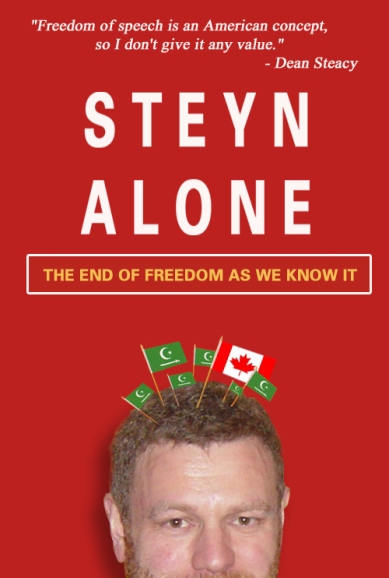 Campaign idea: Develop the “Mark” name a la “Madonna”. Make it iconic.
The campaign will be mysterious at first (Who is Mark) but word of mouth will create the first blog sensation.

I am not a Canadian, but have been mistaken for one in England.

“The Battle Hymn of the Dominion”

Mine eyes have seen the horrors of our civil rights ablaze,
They will crush Islamophobia and blindly back the gays,
They are fighting Neo-Nazis with their Crypto-Fascist ways,
The truth is no defence!
Glory! Glory! Hallelujah!
Richard Warman wants to screw ya!
Any way he can get to ya!
The truth is no defence.

A T-shirt – Featuring the iconic “Woodstock Poster” with the following text replacing the existing wording: The HRC Presents An Egregious Inquisition Canada 2008 3 DAYS OF STEYN & LEVANT “Give Thought Police a Chance” and have the dove on the guitar gagged (and maybe even blindfolded) 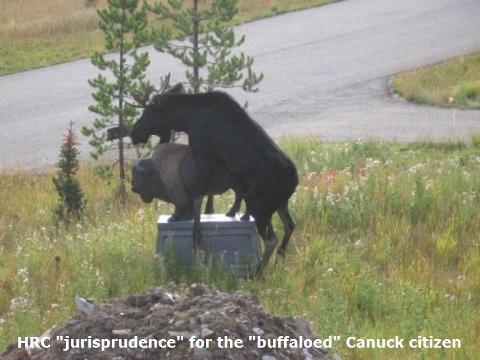 I have written several parodies and poems and posted them on cruxy.com. Some have been posted by Ezra on his page.

Here’s my idea for a t-shirt: (front) A picture of a mountie with tape over his mouth. “The Human Rights Commission always gets their man!” (back) “Keep Canada free. Abolish the HRC!”

Hey, Barbara, Barbara,
Can see why you’d persist
In smearing Steyn and his rag as “racist.”
Don’t it always seem to go
With all those promoting “virtue” not “vice”?
They made HRCs, put up a “paradise.”

Late last night,
The thought cops came for me
And they hauled my butt
Before an HRC.
Don’t it always seem to go
With all those promoting “virtue” not “vice”?
And like Saudis, we’ve put up a “paradise.”

Here’s my one word entry that will work neatly as a bumper sticker, or T-Shirt, or even as a song, if the word is repeated often enough in varying pitch:

Mark Steyn Breeds Like A Mosquito
(am I allowed to say this?)

Make a Mark
Raise a Steyn
To Freedom of Speech

Lord, we don’t need more state oppression,
We’ve got commissions, HR inquisitions, so hard to bear
We’ve got speech analysis, and speech paralysis
More than enough to last ’til the end of time.

The World Needs More
Of Mark Steyn
and his funny accent

Mark Steyn
Has The Right To Speak In His Funny Accent

The World Needs More
Of Mark Steyn
and his funny accent

Mark Steyn
Speaks For Me

CHRC (logo), Lucy (photo?) CIC (logo)
Oh, what a tangled web they weave…
So help Mark, Ezra, and bloggers all, untangle their mess
And leave the World Wide Web free for the rest of us to belss !

Five entries for the tshirt

1.) “The safest road to Hell is the gradual one – the gentle slope, soft underfoot, without sudden turnings, without milestones, without signposts.” – Screwtape

4.) Never give counsel to your fears – Stonewall Jackson

5.) Picture of Porky Pig with the words “HRC vs Steyn: Where’s the pork?” under it… meaning there is “no beef” in the HRC’s complaint, but makes a “subtle” dig at Muslims sensibilities in the process. (btw… on You-tube, look up +”Porky Pig” +”Alibaba” for a really insensitive Looney Tune from days gone by)

6.) A clean white tshirt with a bright red crusader cross and the words “Onward Christian Soldiers” over it.

7.) A picture of Stalin and Hitler with the words “The HRC is so last century”