“The Upside Down is an alternate dimension existing in parallel to the human world. It contains the same locations and infrastructure as the human world, but it is much darker, colder and obscured by an omnipresent fog…. [a] dimension that is a dark reflection, or echo, of our world. It is a place of decay and death, a plane out of phase, a place of monsters. It is right next to you and you do not even see it.” … “Nope. No parallels under here.” (Hilary White)

>> Hilary White: Two religions; one Church? – the infiltration of the Modernist Anti-Christ (Nov. 2017)

>>  REPORTING on the UnChurch: One Peter Five

~ BINKS IS just about to finish ‘Stranger Things‘ on Netflix, Season 1. Must say, I love it.. and it’s hard not to binge-watch it.

No major spoilers ensue below. Promise.

Like ‘The Matrix‘, the hit-show Stranger Things employs that familiar & human sense of displacement, weirdness, that there is an Unseen all around us which sometimes breaks in upon us in our ‘ordinary’ lives. That there is more going on than meets the eye.

In the popular Netflix series, which overflows with references to 80’s pop-culture, there is literally an evil copy parallel dimension called ‘The Upside Down‘, where people can be trapped, and eaten by a monster. The dimensional doorways can appear anywhere and everywhere: the wall of a house, a tree trunk, the basement of a top-secret government lab.

What both ‘The Matrix‘ and ‘Stranger Things‘ lack to make them universal is a spiritual universe above and inter-penetrating the visible ‘ordinary’ universe.. and a clear sense of God & His guiding providence. Sadly, religion plays almost no part in the show, or the lives of the characters. 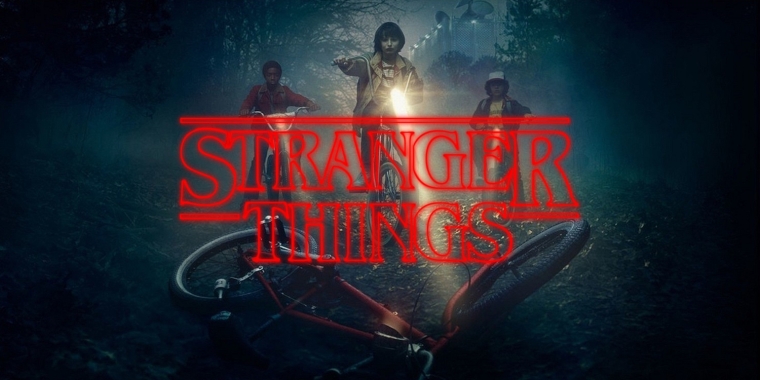 By comparison, the writer J.R.R. Tolkien repeatedly mentions providence without explicating that it is of the Valar (archangels) and Eru (God). The wizard Gandalf’s own long mission in Middle Earth was a sending from the Blessed Land to fight evil, help the free peoples via suffering and pity, and– ultimately– to defeat Sauron, the dark successor to Morgoth (a fallen Valar, the Satan-figure).

In that Lord Of The Rings scene– which Peter Jackson moves from Frodo’s kitchen to the Mines Of Moria– we read:

Frodo: “I wish the Ring had never come to me. I wish none of this had happened.”

Gandalf: “So do all who live to see such times; but that is not for them to decide. All we have to decide is what to do with the time that is given to us.

There are other forces at work in this world, Frodo, besides the will of evil. Bilbo was meant to find the Ring. In which case, you were also meant to have it. And that is an encouraging thought.”

That ‘meant’ bears a world of significance. Consider.

‘Meant’ is God’s providence, in the world, in events, ‘coincidences’, and via people. The Bible proclaims: “All things work together for good to them that love God.” [Rom. 8:28] Note: NOT ‘all things will be pleasant, easy, and straightforward’.

Remember: Christians serve a Crucified and Risen King, who still bears His (now glorious) scars. No easy path there: take up your cross. Follow, die. 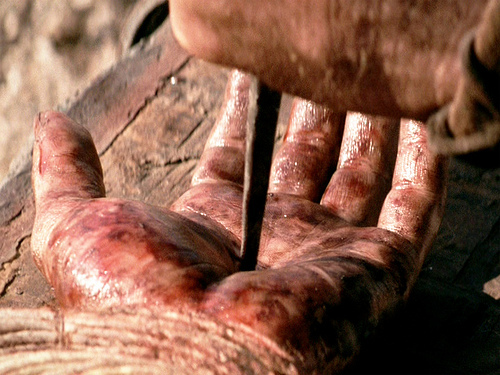 And there’s another sense of “the unseen dimension”, our own actual “Upside Down”, which tempers our anger and enlightens our struggles. As Saint Paul teaches the Christians of Ephesus, and us:

“For we wrestle not against flesh and blood, but against principalities, against powers, against the rulers of the darkness of this world, against spiritual wickedness in high places.” [Eph.  6:12]

Any battle with sin, darkness, heresy– in the church and the world, and in our own hearts, is a combination of many forces, many invisible, or acting through us or other people in a greater & darker pattern than the simply human (as bad as we can be).

Exorcists are still busy in 2018. Possessed people still exist– some in politics, and in the Church itself. Even some clergy may be thus.

The Disorientation Is Real

In the current pontificate of Francis, there is unprecedented darkness, division, dishonesty, confusion and discouragement afoot. Papal hyper-loyalists rally ’round the revolutionary throne, throwing accusations at critics and radical (deep-rooted) Catholics who demand the whole witness of the Church to be heard, respected, lived, taught.

Sometimes, it feels as if an UnChurch from some evil parallel dimension like ‘The Upside Down‘ has invaded our reality, and is seeking to proclaim itself as the real, true, and only thing to serve. There is a spiritual war afoot: each of us can play a double part, on earth as in heaven, for good or bad. The darkness is not simply the opposition themselves, nor we only the bright good ones– for humility and reality’s sake, we admit there are brighter and darker forces in conflict within what we see, and in each soul.

Holy loyalty and faithfulness and restraint are good: but we do not honour the Church or her current leadership via our blind obedience, nor forgetting Whom She really belongs to, and Whose Voice she is supposed to obey. His will is not simply to be identified with the novel dictates of people who seem bound to another message, an unKingdom, a utopia of exalted man making himself into a God, his desires and feelings the measure of all truth and goodness. OUR kingdom come, OUR will be done: and yet, even in this, a greater darkness can be felt, seeping through, pushing, ruining, distorting the Church, but also the fever dreams of utopia, too.

That evil unholy being is not some exact counterpart to God, but a created and fallen Enemy, and likewise all the fallen angels and powers under his control. Alone, we cannot defeat such darkness, for we are but mortal and finite and compromised with darkness ourselves. From such, Christ came to deliver us. 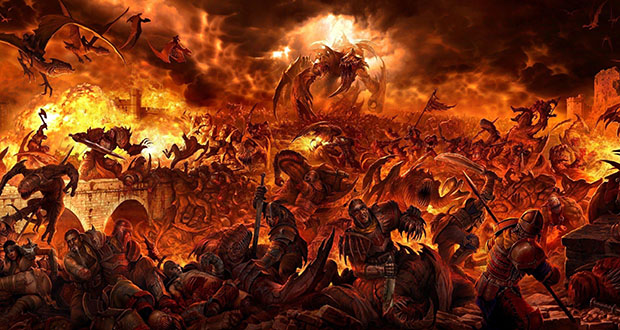 Ancient Paganism sought to placate the dark powers; to deflect the ill will of spirits, gods, sprites, and malicious beings of every sort. Animal and human sacrifice was the trading of precious life for benefits, or being left alone.

The Incarnation changed all that. Jesus is become the Lord of the living and the dead. The suffering King Jesus lays bare the plans and pride and shining schemes of Lucifer; He bore in himself our sin, and has already won the victory over sin, and death, and Hell.. yet the long wrapping up of the battle will seem almost like defeat, as the faithful must abide darkness in the world, the Church, the human heart, and in malicious spiritual forces.

Read the headlines; pray; comfort one another; love the sacraments; repent. Read the Bible & the Church Fathers, and the saints. Read solid blogs and books. Same as it ever was, and there’s no greener grass elsewhere. Cheer up! It will very likely get much worse.

Stay faithful, for God is faithful, and will not abandon us, or leave us weak and comfortless and enslaved to the machinations of the Enemy and his minions, nor to our own sins, negligences, and ignorances. These bizarre times WILL be sorted by God, and by his judgment & mercy, and by better Church leaders and theologians in decades and centuries to come. +