~ THIS IS THE DAY, and the story, of two inspired young men connected by faith and death.

This day, after the celebration of the Joyful Nativity, we count the cost of God’s coming amongst us as one of us: St. Stephen’s Day (sometimes called Boxing Day in English-inspired lands). Faith costs: possibly everything.

Less than two months after the Crucifixion, outside one of Jerusalem’s gates, an angry mob stones to death a young Christian man– who fearlessly preached to the very people & religious leaders who had condemned Jesus to the Cross. Away with him! The dying even forgave his murderers as he died. Looking on was a persecutor of the young Church– one Saul of Tarsus, who would later himself convert and become St. Paul, Evangelist to the Gentile world. 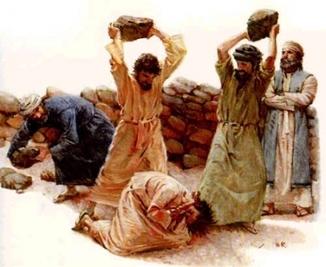 St. Stephen was the first of so many to witness unto Christ Jesus, the Babe of Bethlehem become Risen King by their life unto blood, called martyrs. Holy Innocent’s Day, also following Christmas, reminds us of the slain babes of Bethlehem, by the wrathful King Herod.

Long centuries later, Wenceslaus (or Vaclav) I, Duke of Bohemia (from 921-935) would likewise serve Christ as a martyr. His grandmother had passed onto him the faith before she was murdered; yet many nobles and the establishment powers of Bohemia preferred the old ways of sacrifice, exploitation, murder of each other, and cruel selfishness. Vicious political intrigue was a sport for such leaders.

Why should anyone care for peasants? Why the gentler ways of the new god, Jesus? Why waste money on busy-body missionaries, and teaching the people, and building churches? Why let the exiled Christian clergy back into Bohemia? Why did the Duke live like a humble man of peace, and not a warlike, powerful, and wealthy noble? Away with him.

Before long, young Duke Wenceslaus (in his latter 20s) was slain on the steps of a church by his own treacherous brother, Boleslaw. And yet the Church and the ordinary people remembered their young duke’s Christ-like love and witness, his service and aspiration for a better way for his own lands, and for the world– and so do we unto this day. The holy Duke is the patron saint of the Czech Republic, and his relics are honoured in St. Wenceslas’ Chapel in St. Vitus Cathedral, Prague (below).

Though a Duke, Wenceslaus became a inspirational figure for the Middle Ages of the “Rex Justus“, the godly and Christlike Christian king, using his powers for good, to teach & help & raise up all his people, to rule by law and love, a princely ruler whose power comes from vigour and deep piety.

The saintly friends of God Stephanus and Wenceslaus remind us that young people in general and young men in particular deeply need faithful, knightly, courageous, life-inspiring examples and opportunities to serve as fathers, heroes, leaders, helpers, world-changers, God-servers. If we do not allow this– or squander it– then the church and the world are ill-served, and young lives are wasted in idleness or violence or base pursuits, and not in bold witness unto the Babe of Bethlehem, and King of all nations and People, Jesus Christ.

The famous hymn about Duke Wenceslaus was a lovely bit of Victoriana (much despised by hymn-snobs) based on an older legend: a reminder of the kind of man the Duke was, the people and service he loved, and the kind of people we should be, in loving our neighbour. +

“Hither, page, and stand by me
If thou know’st it, telling
Yonder peasant, who is he?
Where and what his dwelling?”
“Sire, he lives a good league hence
Underneath the mountain
Right against the forest fence
By Saint Agnes’ fountain.”

“Bring me flesh and bring me wine
Bring me pine logs hither
Thou and I will see him dine
When we bear him thither.”
Page and monarch forth they went
Forth they went together
Through the rude wind’s wild lament
And the bitter weather

“Sire, the night is darker now
And the wind blows stronger
Fails my heart, I know not how,
I can go no longer.”
“Mark my footsteps, my good page
Tread thou in them boldly
Thou shalt find the winter’s rage
Freeze thy blood less coldly.”

In his master’s steps he trod
Where the snow lay dinted
Heat was in the very sod
Which the Saint had printed
Therefore, Christian men, be sure
Wealth or rank possessing
Ye who now will bless the poor
Shall yourselves find blessing.